We spent a fair amount of time in the Paris Metro. It’s the easiest way to get around the city. Every day we would stumble across a lone guitarist playing for spare change, or more annoyingly, an obnoxious accordion player who boarded a train and serenaded the weary travelers into submission.

One afternoon as we were travelling back to our apartment, I could have swore I heard classical music echoing from the tunnel ahead of us. Sure enough, as we progressed the sound became more distinct until we happened upon a larger intersection of train tunnels where an entire string ensemble was performing a classical masterpiece. They were really good. It sounded like Vivaldi, but I’m no expert. I shot some video. Does anyone recognize this song?

Here’s a still photo for those of you having trouble watching the movie. 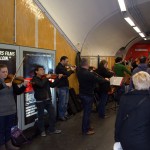